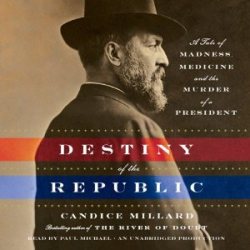 Candice Millard’s Destiny of the Republic is a marvelous tale of James A. Garfield and his brief presidency, the madman who shot him and the medical errors, hubris and willful ignorance that led to the infection which ultimately killed him.

There is a sense of déjà vu throughout the book’s research: the fury of the political dealing and vitriol, the backdrop of race relations less than twenty years after the end of the Civil War, the unrelenting demands from an all-too accessible public. Villains abound. The president’s political nemesis, Roscoe Conkling, was corrupt, bombastic and brazenly ambitious; he assumed his ‘ownership’ of Vice President Chester A. Arthur was absolute and astounded when Arthur met the challenge of political ascent without any input from or contact with Conkling. The assassin, Charles Julius Guiteau, was deluded, mentally ill and broke, yet lucid enough to purchase a gun using borrowed money and close in on the unprotected president as he was about to board a train to leave Washington. The surgeon who took charge of Garfield’s care, D. Willard Bliss, was controlling, self-promoting and ultimately incompetent; his actions prevented the president’s recovery.

One of the many tragedies in this story is how the bullet itself did not kill the wounded president. Despite the British physician Joseph Lister’s discovery and promotion of antisepsis–“preventing infection by destroying germs”–most doctors in the United States refused to acknowledge Lister’s research and resolutely ignored the protocols he recommended.

In a story with very few heroes, one of them is the prolific inventor, Alexander Graham Bell, who summoned all of his energies to create a device, an induction balance, to detect the metal bullet lodged within the wounded president’s body. Another is Julia Sand, a homebound woman who corresponded with then-Vice President Arthur, providing guidance and insights from which he drew courage and confidence to lead the country in an entirely unexpected and positive way.

Aside from the rich historical and political detail captured in the book, one of the delights was learning about and understanding James A. Garfield as a man–his childhood, his service in the Civil War, his courtship of his wife and the ups and downs of their marriage, his education and his relationship with his children. Millard brings Garfield to life in a marvelous ‘you are there’ way. He comes across as admirable, likable, smart and utterly self-aware. Although the times are very different, he made me wistful for what a government leader could be.