If you happen to take the Purple Line going south, stop and notice these enlarged mementos from the CTA of yesteryear.

1946 Chicago Rapid Transit Company Map. The 4000 Series cars were featured on the cover.

In 1908, the Northwestern Elevated Railroad extended “L” service into Evanston using tracks leased from the

Chicago Milwaukee & St. Paul Railway. Within a few years’ time, the surface level tracks were placed on an embankment and the present-day Main Street station and platforms were placed in service.

In 1973, the Chicago Transit Authority’s venerable 4000-series rapid transit cars were retired after a half century of service. A total of 205 of these cars were built for the Chicago system over a several year period in the early 1920’s by the Cincinnati Car Company and saw service throughout the Chicago ‘L’ system.  After the last cars were retired from the Evanston rapid transit line in 1973, cars 4271 and 4272 were selected for preservation by the Chicago Transit Authority. In February 2014, these cars paused at Main for a photo. 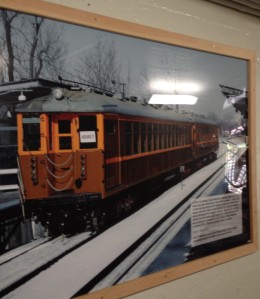 A world of film, a house of stuff.

My great Wordpress blog
Going To The Dogs

Howdy! We're the largest independent bookstore in Texas. This is our blog.

defining the words that define us