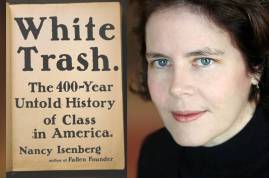 I first heard about J.D. Vance’s book, Hillbilly Elegy, from my Aunt Sue, who had read it as part of the syllabus for a college course she audited last fall. It was November, shortly after the election, and I was still in a fog of disbelief about the results. She recommended it as essential reading and promised it would explain a lot.

A few weeks later I was browsing for a gift in a small book store and asked the owner if she had noticed any differences in her customers’ purchasing habits since the election. She acknowledged that, indeed there were changes. In the days immediately after the election, there was hardly any store traffic. No one was in the mood to shop; people were hunkering down. But after a few days, things got back to normal — whatever that is — and she had two types of requests: non-fiction (explain the election, how did this happen?) or fiction (get me out of here, this can’t be happening).  In the former category, two books were in hot demand, White Trash: The 400-Year Old Untold History of Class in America by Nancy Isenberg and Hillbilly Elegy.

In Isenberg’s White Trash, “the poor are always with us,” and labeling the underclass of poor whites implies “an imposed inheritance” that almost invariably prevents them from escape and encourages demonization if not blame. For them, the American dream of upward mobility is largely “unobtainable.”

First known as “waste people,” and later “white trash,” marginalized Americans were stigmatized for their inability to be productive, to own property, or to produce healthy and upwardly mobile children–the sense of uplift on which the American dream is predicated. The American solution to poverty and social backwardness was not what we might expect. Well into the twentieth century, expulsion and sterilization sounded rational to those who wished to reduce the burden of “loser” people on the larger economy. (p. xv, White Trash)

The book is long, dense, and at times, tedious. Isenberg weaves the history of how the poor in this country have been treated and viewed as expendable fodder as far back as the 1500s when the land was a colonial outpost of Great Britain and a dumping ground for undesirables. There are three main themes: the importance of our country’s rural past; the pervasive role class hierarchy plays in the United States; and how land ownership and class are connected, in that “the worst classes were seen as extrusions of the worst land: scrubby, barren, and swampy wasteland.” By the time these themes reach the likes of Honey Boo Boo and the current economic struggles of the lower rungs of the 99%, I was pretty discouraged although much better informed.

Hillbilly Elegy is a memoir of an unusual childhood. J.D. Vance grew up in the Rust Belt of Ohio with deep family ties in the hills of eastern Kentucky. He was raised by his grandparents; his mother had substance abuse problems throughout his early years and he nearly failed out of high school…except he didn’t, because of the love and support of a few people and a fair amount of luck. He graduated high school, joined the Marines, served in Iraq, graduated from Ohio State in two years, and graduated from Yale Law School. He made it out and he made it big.

The majesty of  Vance’s story is learning why, amidst such a chaotic start, he did not give up on himself and why he did not give in to the despair, pessimism, and cynicism all around him. He describes growing up in deep poverty with familial violence as a norm. Years later he learns that the yelling, fighting, and abuse he and his sister experienced had a name–“adverse childhood experiences”–and that children with multiple ACEs are statistically more likely to experience adverse health and behavioral issues. He is unabashedly loyal to his family and loves them unconditionally, but he is clear about the bad choices his family and neighbors have made and the impact those choices have had on their lives and on the lives of the children in their care.

Vance despairs about the rampant drug addictions tearing through his hometown, and how unprepared its residernts are to confront a knowledge-based economy. He assigns both fault and credit to certain aspects of government programs, family decisions, and cultural norms. Vance doesn’t pretend to speak for all of his kin or neighbors, but he does present a portrait unfamiliar to many Americans and one that is helpful to understand. He writes with objective emotion and sensitivity; he is not bitter or vengeful, and surprisingly forgiving, accepting, and understanding of his mother. He recognizes he is lucky to have had loving grandparents who instilled him with good values and self-confidence and good mentors who believed in him and taught him about things he was never exposed to at home.

Neither White Trash nor Hillbilly Elegy are the definitive answer about how and why our country elected this president, but they are important parts of the conversation. I recommend them.

A world of film, a house of stuff.

My great Wordpress blog
Going To The Dogs

Howdy! We're the largest independent bookstore in Texas. This is our blog.

defining the words that define us